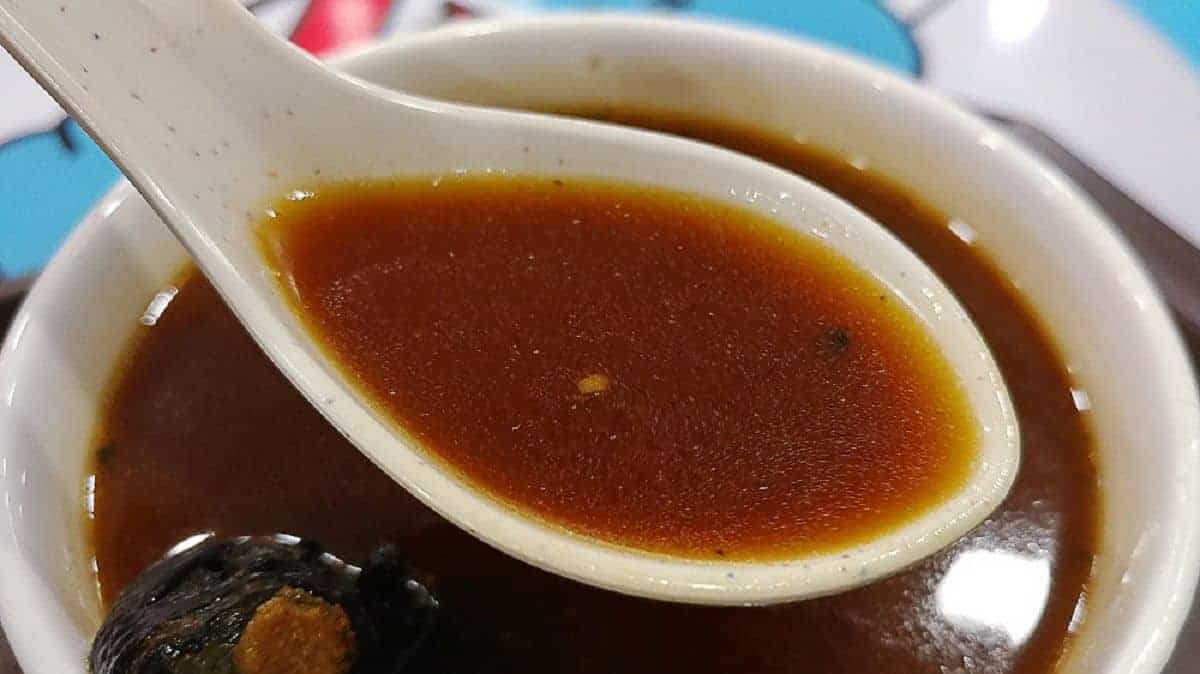 If you love rich and intense herbal soup, you will be in a treat for this one. By a stroke of luck, the Ah Er Soup ( 阿二煲靓汤 ) is one of the hidden gems we have uncovered in the west side of Singapore years ago.

You know you are in for an good and affordable meal when the stall is frequented by many workers in the area. There were several branches of Ah Er Soup in Singapore such as the ABC Brickworks Market & Food Centre. Though Ah Er Soup is one of the new hawkers that was awarded the Michelin Bib Gourmand Award 2017, we still find the original Ah Er Soup stall at Yuan Ching Road best among all.

In case you find this shop unfamiliar compared to other blogs, the food court just been has been revamped a year ago. Though the entire outlook of the food court is fresh, bright and inviting, it somehow looks the same as the rest of the thousands over food courts in Singapore. We do miss its old traditional vibe.

Like our Page to receive notifications on interesting articles such as this.

Though the food court has been revamped, we are glad and relieved to find that the price for the famous black chicken soup remains the same at S$6. Here we still get the same old generous serving of the holy broth.

The broth was a class of its own.

If you are worried about the bitter herbal aftertaste, you dont have to worry at all. Unlike many herbal chicken soup, the broth was immensely rich, smooth and flavorful without any bitter aftertaste.


The Lao Huo Tang 老火汤 franchise pales in comparison and is a watered down version of the Ah Er black chicken soup which has a deeper multi-dimensional flavor. It is definitely a pleasant surprise as many stalls tend to water down the broth so they can sell more bowls of soup.

If there was something we had to pick, we would prefer if they add less dark soy sauce for colouring as we could taste a slight dark soy sauce tang in the broth.

By the way, dont be fooled by its dark broth. Underneath the murky herbal broth lies a massive black chicken thigh. The meat was soft and tender and literally fell off the bone when we tried to take a bite.


Instead of the normal white rice, we opt for their olive rice which only costed an additional dollar. It was fragrant and fluffy. Every grain of the rice was coated with the goodness of preserved olive and was a perfect fit to the herbal soup.

The Ah Er Soup is definitely one of the best cheap and good food in Singapore. The black chicken soup was a truly complete fulfilling meal even if you are a heavy eater. This also shows that our foreign counterparts really know their food well. Perhaps next time when you see a stall with a long queue of foreigners, maybe you should try it out.

Speaking of good food, perhaps you should really try visiting Bukit Indah Aeon for a short weekend getaway, where you can enjoy the traditional kolo mee and catch a movie for only S$3! We have a lot of recommended best deals in Singapore over here as well so be sure to subscribe to us for more reviews!

Scroll back to top